The Stillwater Lift Bridge carries State Highway 36 over the St. Croix River between Stillwater, Washington County, Minnesota, and Houlton, Wisconsin. Constructed in 1931, the 10-span bridge includes six steel Parker through truss spans, one movable span of the type commonly known as a “Waddell and Harrington vertical lift,” and three concrete slab approach spans. It was originally developed by renowned movable bridge engineer J.A.L. Waddell in 1892 and subsequently refined in partnership with John Lyle Harrington, also an engineer. The firm of Waddell and Harrington designed many varieties of movable bridges in the early twentieth century. The lift span is raised and lowered by steel cables passing over sheaths at the top of steel towers mounted on the span's piers. To ensure easy movement, the span is counterweighted by concrete blocks that travel up and down within the tower framework. The bridge has a functional and symbolic connection with downtown Stillwater, which is represented in the bridge concourse, located at the west approach. This feature includes Classical Revival details, including the open balustrade, light standards, and other concrete elements. 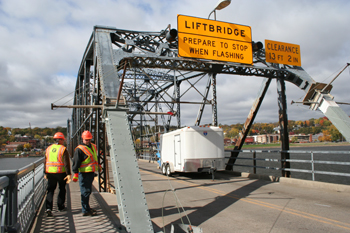 In 2012 interim repairs were made to straighten damaged truss members, including on the portal opening, and to restore deteriorated portions of the bridge’s concrete concourse and approach span balustrade. The concrete repairs were carefully completed using treatment methods designed to match the historic concrete, involving use of test panels to match color and surface treatment.

In 2017, vehicular traffic was switched from the Lift Bridge to the new St. Croix Crossing bridge. The Lift Bridge was converted to a bicycle/pedestrian bridge in 2020.